Numbers 1 - 6 selects unit groups and left clicking moves them. Use the last 100 soldiers to survive as many rounds as possible.

Gold units are all around-rounders while purple are your tank soldiers. The rest is up to you to discover!

This game was made for Weekly Game Jam #100.

If you have performance issues with HTML please download!

This is an interesting idea. I wish it wouldn't select a different group when I am trying to get the group I have selected to move next to them. I also would like it if we could see the enemy.

Cool game! Took a few waves to get into it, but once it clicked I enjoyed it quite a bit. I had a little trouble telling if I was damaging the enemy, or if they were hurting me. (I lost at least a couple of units, but didn't see how) Also, it seemed like the waves would consistently end with a single enemy unit still battling onscreen.

Didn't play through a ton of waves, but I liked what I played!

Felt like the only reliable units were the super long range light purple ones. The only downside to them is that they were slow. The standard gold units and the fast red units didn't really seem to do enough damage to matter, so I was pretty much just using the light purple heavy hitters and the tanks.

Initially it was hard to tell which units I had selected because my expectation was that the selected unit would be bolded/outlined somehow, but instead they were made slightly transparent. I think the range circles could also be made more clear. 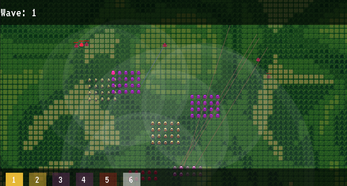